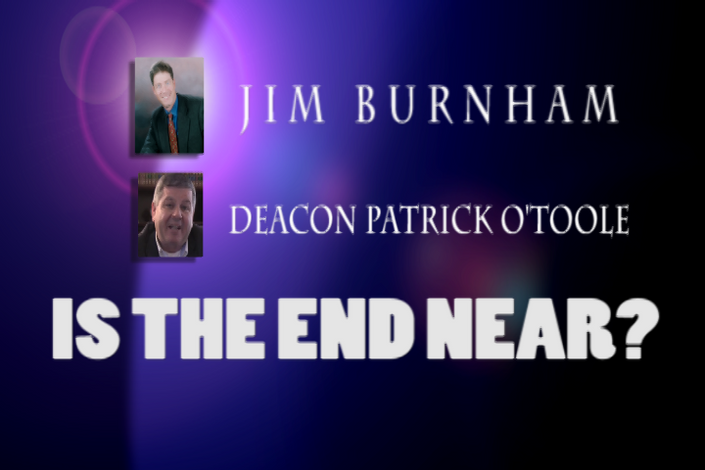 Is The End Near?

When Will It Happen? What Are The Warning Signs? Are You Ready?

In recent years, there has been an explosion of books and tapes produced by self-proclaimed Bible prophesy experts predicting that the rapture of the world is

just around the corner.

We are living at a time when there is a fascination with the "signs of the times" and the possibility that we are nearing the end of the world.

What do we really know about the END OF TIME ?

Jesus describes it in detail in Matthew's Gospel.

There will be WARS and rumors of wars,

We are witnessing MORE wars and LESS peace in our world today!

Natural disasters are occurring at an

More CHRISTIANS are being persecuted

and killed than ever before.

There are constant attempts to remove GOD from our culture.

Morality appears to be at an all-time low!

It is not hard to imagine

Jim Burnham, a life-long Catholic, is an internationally known apologist, author, and teacher of Catholic doctrine. He is the second oldest of ten children. In 1989, Jim graduated as valedictorian from Michigan’s Hillsdale College with a degree in philosophy. He later pursued graduate studies in philosophy and theology at Thomas Aquinas College in Santa Paula, California. Tough biblical challenges about the Catholic Church put to him by several Evangelical Protestant classmates forced Jim to rediscover the compelling biblical and historical basis in support of his Catholic faith. This strengthened him as a Catholic, enkindling in him a passion for biblical apologetics.

Deacon Patrick O’Toole is the oldest of six children and was born in Kansas City, Kansas. He was ordained into the permanent diaconate in the Diocese of Springfield, Illinois, in 2009. He served the diocese for 5 years as the director of Marriage and Family Life and is currently the director of the Villa Maria Catholic Conference and Retreat Center situated on Lake Springfield. Patrick and his family belong to St. Maurice Parish in Morrisonville, Illinois, and he serves the pastoral unit of St. Maurice, St. Mary, and St. Raymond as a deacon. He became a Global Fellow in 2010 and traveled with CRS to Ethiopia in 2011. He and his wife, Daniele, are blessed with 13 children and 1 grandchild.

as they present the significance

of these important events.

Enroll in their 4 Part Series with a total of 16 Lessons.

Enjoy and learn from over 3 hours of video presentations.